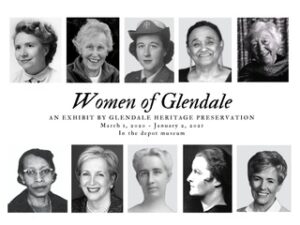 Glendale Heritage Preservation is proud to present a major exhibit that tells the stories of 34 Glendale women whose contributions between the years 1855 and 2000 helped shape the culture, history and lives of the Village and beyond.

The exhibit, which is being staged during 2020 in the depot museum on Glendale’s historic village square, is timed to honor the 100th anniversary of the passage of the 19th amendment, giving women the right to vote.  It does so by acknowledging women who led action that inspired innovation and change, and made a significant impact on society through the arts, education, women’s rights, public health and social welfare, commerce, community development, religion and philanthropy.

To read the stories of the women in the Women of Glendale exhibit, please click on each woman’s name below:

Click to watch the video “Life Experiences of Glendale Woman Before Suffrage” on the “Glendale Heritage Preservation” YouTube channel.

How the “Women of Glendale” were selected:

During 2019, several public requests for nominations were made among Glendale residents and extended family members, former residents of the Village, members of area organizations and the general public.

Over the months, volunteer researchers also combed the archives and family files of Glendale Heritage Preservation.

By the end of the year, more than 50 nominations were received. Each was reviewed by a panel of seven. That panel used the following criteria to select the final 34 Women of Glendale:

Women who lived in Glendale, and who made timeless contributions to the Village and beyond, between the years 1855 and 2000.

Women who led action that inspired innovation and change

Women who made a significant impact on society

Garry Terrell
For acting as the exhibit photographer