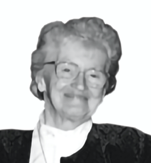 “Evelyn showed us all to lead by example. Her legacy … is the good work that is being accomplished by those who chose to follow her lead.”

Evelyn grew up in Lockland. She was one of first women to graduate from the University of Cincinnati College of Pharmacy, Class of 1942. Soon after graduation, she married Tom Joseph, and they moved to Glendale where they raised their eight children.

When the need arose, as a strong woman of Christian faith, she became a substitute and then full-time teacher at St Gabriel School.

She continued to maintain her credentials as a Registered Pharmacist while her family grew and was one of the earliest pharmacists at Gehring’s in the Village Square and Kasten’s at the corner of Sharon and Congress.

In a typical day at the pharmacy, Evelyn was always ready to listen and give advice to all Glendale customers in a way only she could, ranging from proper medicine dosages, drug interactions and getting personal updates on customers’ families to touching the lives of countless families.

Evelyn stayed devoted to her pharmacy career and customers until six months before she died at the age of 81.