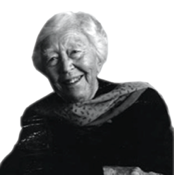 “She was a force of her own, not governed by convention or duty or rules.”
Christina Muir Rambeau

Kay Muir influenced contemporary art like few others – through her work as a creative and exciting colorist and as a passionate guide teaching others to find themselves through art.

A native of Detroit, Kay was a graduate of the University of Michigan. While a student, she designed sets and costumes for theatrical productions and helped to establish the Children’s Theater of Ann Arbor.

After marrying Tom Muir, the couple moved to Glendale in 1942 and raised four children. Kay then returned to her art studies at the Art Academy of Cincinnati where she worked with Paul Chidlaw, Paul Moscat, Arthur Helwig and Josef Albers in the 1950s.

Her art was once described as “recreating for us a spirit of the world lost to all but children.” From her perspective, she was “an agent who manipulates the jewels of color … to make the eye dance over the canvas.” Today, her work is in the permanent collections of the Cincinnati Art Museum, the Art Academy of Cincinnati, Dayton Art Institute and in private collections in the US and Canada.

Kay supported the arts as a student, volunteer, and fundraiser for the Cincinnati Art Academy. In the 1950s, she was among the early advocates for contemporary art in Cincinnati and was a founder of the Modern Art Society, which was the forerunner of the Cincinnati Contemporary Art Center.